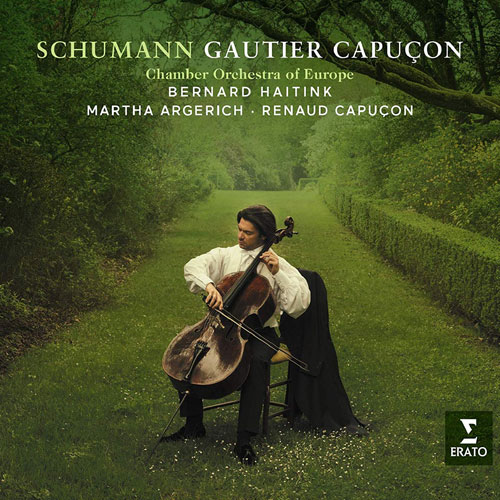 with Bernard Haitink, Martha Argerich, Renaud Capuçon
This album of cello music by Schumann is a project that's taken several years to develop. The first seeds were sownin Lugano,where I was involved in live recordings from the Martha Argerich Project Festival: Martha and I performed the Adagio and Allegro, the Fantasiestücke, op.73 and the Fünf Stücke im Volkston, and we were joined by my brother Renaud for the Fantasiestücke, op.88.

Then, in 2014, when I played the Cello Concerto with the Chamber Orchestra of Europe and Bernard Haitink for the first time, my thoughts again turned to making a Schumann album.

We went on to give several more performances together, and it was at our last concert, at the Concertgebouw inAmsterdam, that we decided to record the concerto live.

It's been a wonderful and emotional experience making this live album in close collaboration with my brother and other friends and colleagues  people who've had faith in me since I was very young.

The album also represents an artistic encounter with American photographer Jamie Beck  together we travelled back in time to the exciting nineteenth-century world of Romanticism and Robert Schumann.